Find this article at:
go.ncsu.edu/readext?758107
— Written By Miguel Castillo

The Forage & Grassland Program at NC State University teamed up with Livestock Extension Agents from Bladen, Cumberland,Robeson, Scotland, and Sampson Counties, and with two farmer cooperators, to establish an on-farm replicated research trial to evaluate five sprigged bermudagrass cultivars in spray field conditions. In 2016, five sprigged bermudagrass cultivars (Coastal’, ‘Midland 99’, ‘Ozark’, ‘Tifton 44’, and ‘Tifton 85’) were established on a swine farm spray field in Bladen County and were evaluated for 3 years (2016, 2017, and 2018). The field was sprigged on April 6, 2016 (Figure 1). Sprigged bermudagrass cultivars were planted at a rate of 40 bushels/acre and sprigs were planted at 3 inches depth. Plot size was 70 x 100 feet, there were a total of 15 plots with treatments (cultivars) arranged in a complete randomized block design replicated 3 times.

Figure 1. Picture of sprigs (planting material) and the sprig-planter equipment.

One week after planting, on April 13, and before bermudagrass emergence was observed, Direx (diuron) herbicide was applied at 1.3 quarts/acre; then, on June 4th, 0.625 ounces/acre of Cimarron (metsulfuron) and 2 pints/acre of 2,4-d were applied for broadleaf weed control. Since the trial was conducted on-farm in a hog farm, fertilizer was provided through hog lagoon effluent which was applied based on the farm’s waste utilization plan limits and considering weather and lagoon conditions. Harvest intervals ranged from 26 to 45 days; a walk-behind sickle bar mower was used to clip the plots to 3-4 inches stubble height. The clippings were hand-raked, weighed fresh in the field, and grab samples were collected for determination of moisture concentration, dry matter yield, nutrient analysis, and botanical composition.

Under the spray field conditions of this experiment, 3 months after planting (by July 2016) ground coverage by the grasses ranged from 40 to 98% and canopy heights were equal to or greater than 14 inches; however, by August of the same year all grasses reached 100% canopy cover (Figure 2). 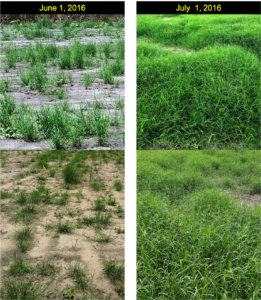 The 3-year average results indicate that cultivar Tifton 85 had a slightly greater dry matter yield compared to Coastal, Ozark, and Tifton 44, and similar dry matter yield to Midland 99 (Figure 3). There were differences in dry matter yield per year and they are also attributed to observed stem maggot damage which was less for Tifton 85 and Midland 99 in years 2016 and 2017 (data not shown). The total digestible nutrient concentration (TDN) was similar among cultivars at 62.2%. There were moderate differences in crude protein (CP) concentration (ranged from 18 to 21%); however, both TDN and CP concentration are high enough to meet the nutritional demand of a lactating beef cow in the first 90 days after calving if the bermudagrass forage was the only source of feed.

The generally considered safe threshold for all kinds of livestock if forage is the sole source of feed is ≤ 5000 mg NO3– kg-1 (0.5% NO3–). Nonetheless, it is important to keep in mind that no single level of nitrate is toxic under all conditions due to the wide variation in the degree of tolerance to nitrates among animal species. Frequent testing for nitrate concentration by harvested hay lot, if possible, is advised.

Hay production from spray fields results in high yielding and high nutritive value forage. Differences among bermudagrass cultivars were observed for dry matter yield during years where bermudagrass stem maggot damage was observed, and in those years Midland 99 and Tifton 85 performed better. There were minor differences in terms of nutritive value estimates. Because of the high variability in nitrate ion tissue concentration, frequent testing, if possible by harvested hay lot, is advised.