Foxtail Is Taking Over My Hay Field. What Can I Do to Control This Weedy Grass?

Find this article at:
go.ncsu.edu/readext?589203
— Written By Miguel Castillo 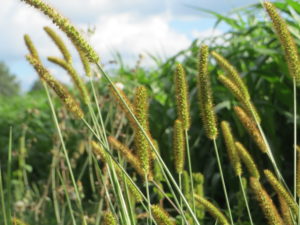 Answer: Foxtail is an annual grass that germinates in the spring when soil temperature averages 65 degrees for three consecutive days. Alexander County soil temperature data from 2009 to 2018 shows 65°F three-day average soil temperature occurred between April 22 and May 9. This is why foxtail is typically a problem for the second hay cuttings.

In 2017, Prowl H2O was registered for use on established pastures and hay fields. Prowl is a preemergent herbicide. The active ingredient is pendimethalin. A preemergent herbicide is a great tool for controlling annual weeds, such as foxtail, prior to their germination.

For a preemergent herbicide to be effective, it must be applied before the weed germinates. Foxtail germinates between mid April and mid May in the western Piedmont of NC. Preemergent applications should be made by April 1 for consistent foxtail control.

Prowl H2O typically mixes well with liquid fertilizer as well as broadleaf pasture herbicides. The inclusion of broadleaf herbicide such as Weed Master, Grazon P+D, or Crossbow in the tank will control emerged broadleaf weeds. A compatibility test should be performed to confirm the fertilizer and or herbicide can be tank-mixed together.

Prowl H2O should not be applied to seedling fescue or seedling / newly sprigged bermudagrass. Besides foxtail, Prowl will also control other annuals such as crabgrass, goosegrass, fall panicum, and pigweed.

It is important to be aware of restrictions with Prowl. There is a grazing restriction of 60 days and a hay restriction of 45 days. These restrictions are the time between making the herbicide application and when the forage can be grazed or harvested.

For Prowl H2O to be effective, it must be rain activated within two days of application, however the sooner the better. Always read and follow the labeled directions before making a pesticide application.

In the western Piedmont of North Carolina foxtail will be one of three annual foxtail species. These annual foxtails are yellow foxtail, green foxtail, and giant foxtail. It is possible there may be knotroot foxtail (also called perennial foxtail) growing in the Piedmont of North Carolina. This weed is a problem in Georgia and Tennessee. Prowl will not control knotroot foxtail. Contact your local N.C. Cooperative Extension Agent if you have questions.

This brief came out as a result of the Forage Winter Training that took place at the Piedmont Research Station on 13 Feb. 2019. 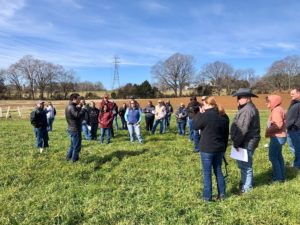 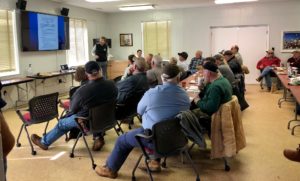